Hit enter to search or ESC to close

Our customer was lucky enough not to lose their home in the Black Forest Fire, but their deck sustained significant damage. They hired DBS to rebuild their custom deck and add-on to what they had previously. We tore down the existing deck and built the current one out of KDAT (Kiln-dried after treatment) framing and Fiberon IPE composite decking. The custom-designed wrought-iron railing was salvaged, cleaned, sandblasted, re-powder coated, and attached to the rebuilt stone columns, which feature custom concrete stone caps. The customer decided to add a large cedar pergola, which we constructed in order to utilize the existing stone columns by putting pergola posts inside the columns. The design of the pergola also added to the grand appearance of the house. All of the design and build work that went into this deck resulted in an outdoor entertainment area that the customer enjoys extensively with their family and friends. 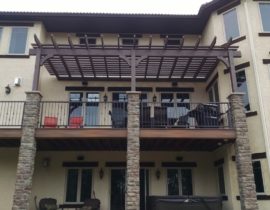 SH-2 - The large cedar pergola not only adds some shade to the deck, but it also enhances the whole facade of the house. 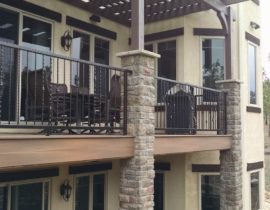 SH-3 - The salvaged and refurbished custom designed railing perfectly accents the stone columns which are utilized to support the cedar pergola. 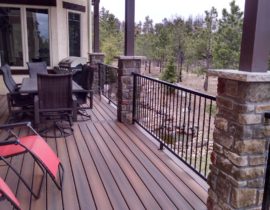 SH-4 - Composite decking was laid at a 90 degree angle to the joists with a single divider board. 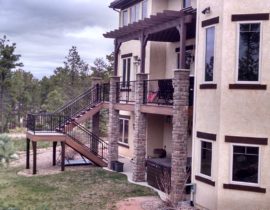 SH-5 - Adding a stair way with a 180-degree turn landing allows the customer to easily access the hot tub area under the deck. 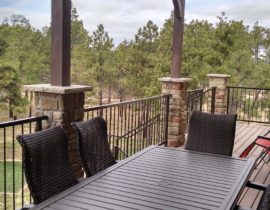 SH-6 - The customer decided to add a large cedar pergola to provide some shade to their seating area. 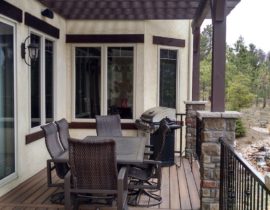 SH-7 - DBS was able to utilize the custom stone columns for the pergola by putting the posts in the columns. 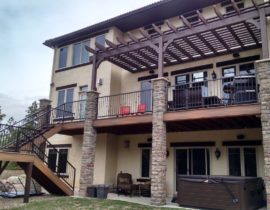 SH-8 - This deck incorporates many custom designed and built features - the salvaged railing, the stone columns, and the pergola. They all blend to create this beautiful outdoor living space. 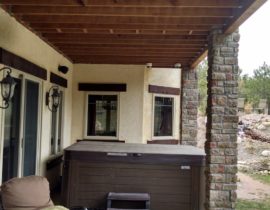 SH-9 - KDAT (Kiln-dried after treatment) framing was used because of its appearance and durability.
Call (719) 440-6966 for an estimate! CONTACT US